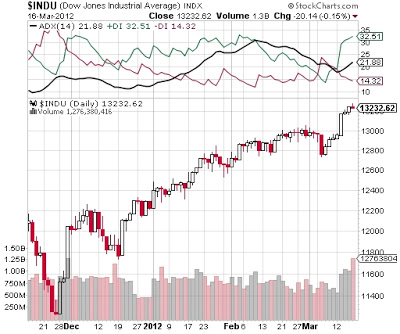 When an ADX reading is low, it is likely that the instrument will be trading in a narrow price range. A higher reading means it’s likely that the the instrument is trending either upwards or downwards. On many charting programs the ADX, is couple with two other indicators the Minus Directional Indicator (-DI) and Plus Directional Indicator (+DI). These complement ADX by defining the direction of the trend. Some people ignore these complementing indicators as they feel having to much faith in them can land you in deep water.
On the chart above taken from the very useful StockCharts.com, the thick black line displays the ADX, while the other two lines display the -DI and +DI. The -DI is in red and the +Di is in blue. As you can see on the chart above the ADX begins to rise as the upward trend in Dow Jones Industrial Average is established. You can also witness the -DI in red fall significantly in comparison to the +DI which suggests an upward trend is being established.
On the right hand side of the ADX graph you can see the ADX scale which gives you the ADX value. It is generally held that when the ADX is below 20, the instrument is not trending in any direction. Once the ADX starts rising above 20 a trend is beginning to be established, if the indicator rises above 30 the trend on the particular instrument is particularly strong. The ADX rarely ever rises above 50 and often once the ADX rises to these kind of levels the trends often tend to break down.
Welles Wilder the creator of the ADX indicator set forth a simple trading method to be used with the indicators in his 1978 book, New Concepts in Technical Trading called the DI crossover method. The first requirement to use the system is that the ADX is over 25, so we know their is a significant trend ongoing in the instrument in question. A buy signal occurs when the +DI signal crosses above -DI.  Wilder recommends that you place the stop on the low of that particular trading day, and run with the signal until this level is reached. Conversely a sell signal arises when ADX is over 25 and the -DI crosses above DI+, the stop loss according to Wilder should be set at the particularly days trading high.
The calculations behind ADX, and the related indicators are complex but using the technical signal seems easier but still require practice and discipline. But ADX can be a useful tool for technical traders especially those who like to trade on momentum.