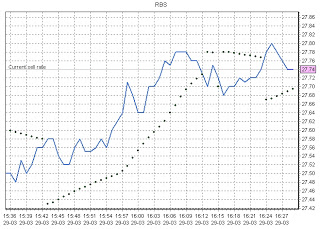 The indicator is pretty simple to understand. Dots above the price are taken to be a bearish sign and dots below the current price are taken to be a bullish sign. As you can see on the chart above the Parabolic SAR lies below the price for a bulk of the chart which see’s a sustained rise in the price of the stock in question. It is also taken that the narrowing of the gap between the dot and the actual price represents as a sign that the current trend is about to end, with a switch momentum being a distinct possibility. It is important to take a minute to note that the Parabolic SAR is an accelerating system which allows a trader to watch a trend develop and establish itself in real time, while this works very well when there is a strong trend occurring. But the relationship seems to break down in sideways market places which sees the Parabolic SAR producing many fake signals.