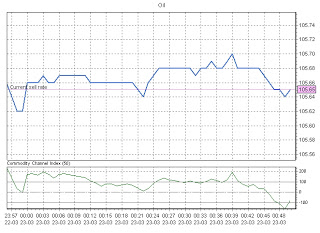 The Commodity Channel Index as calculated by Donald Lambert ensures that between 70 and 80 percent of Commodity Channel Index values should fall between -100 and 100+, though during longer time periods a larger number of values will fall outside the -100 and 100+ range. As the Commodity Channel Index measures the difference between an instruments recent price change relative to it’s average price change. A high positive reading indicates that prices are significantly above their average which can be taken as a sign of strength. While a low negative reading indicates that prices are below average and can be taken as a sign of weakness.

As previously mentioned in Donald Lambert’s original calculation 70 and 80 percent of the values should fall between -100 and 100+. The Commodity Channel index can be used as both a coincident or leading indicator. When used as a coincident indicator, a value above 100+ is taken to reflect strong price action which may signal the start of an upturn. While conversely a value below 100- is taken as a sign of weak price action that may signal a downturn. When one is using the Commodity Channel Index one should be careful in order to avoid the many whipsaws that occur with the indicator and I would personally suggest adding another indicator to the mix.