Well known hedge fund manager, who appeared in the BBC trading documentary Million Dollar Traders and lead where with the help of fellow trader Anton Kreil led a group of trading newbies who would be running a hedge fund with operating capital of a million dollars. Around this time Lex Van Dam released a book called How to Make Money trading which claims that it can teach you ‘all you need to know to create your own ‘City-sized’ bonus.’ I believe that Lex Van Dam is currently one of the managers and capital partners of a hedge fund based in North London called Hampstead Capital. 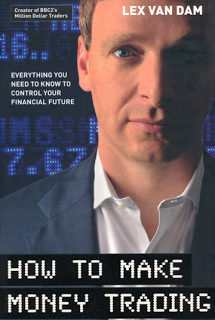 It is clear that Lex Van Dam knows the world of the financial markets very well but it also becomes clear quite early on that this book is targeted at beginners and those new to trading. Most probably aimed at those who had their interest in trading piqued by the show. Anton Kreil who also appeared on Million Dollar Traders has also decided to go down the instructional route since the show. This is probably why the book is aimed towards beginners to tap into the market of those who wish to learn more about financial markets. It’s shame that Lex Van Dam who does have significant experience of the financial markets didn’t
Lex Van Dam does a very good job of introducing the basic concepts that are necessary for trading the financial markets. This won’t be very scintillating for those who already have significant knowledge of the workings of the stock markets, but I have to keep in mind the audience that this book is aimed at.  It provides the reader with a nice overview of how an individual can trade stocks and runs through both basic fundamental and technical analysis. The ideas in the book are well written and presented, but it must be said that the majority of the information in the book can easily be found online or in the free information that most derivative brokers will happily supply to their clients as a PDF.
If I’m totally honest I’m not overly impressed with Lex Van Dam’s How to Make Money Trading, while it is perfectly adequate introduction to the subject it is nothing impressive and even for the beginner it will likely only be a one time read. This forces me to give to the book a measly 2.5 out of 5.