Today I am going to take a look at ETF arbitrage. For those who don’t already know what are I will give a quick explanation. ETF’s (Exchange Traded Funds) are funds that are composed of different asset classes and are designed to give exposure to a particular area. Whether that be Indices, Geographical areas or business sectors. The majority of ETF’s are related to Indices but a number of ETF’s are designed to give more niche exposure. For example the OIH Oil Service ETF provides exposure to companies that provide services for the Oil sector while the iShares EU50 gives exposure to 50 large cap companies across Europe.


ETF’s are generally used as either as an investment vehicle (attractive as they have lower fees than actively managed funds) or as a tool to take on exposure to particular niche’s or regions. In theory an ETF should trade around the NAV per Share (Net Asset Value), which is worked out by taking the total value of the assets held by the ETF and dividing this by the total number of Shares.  For example take an Imaginary ETF called the Luxury Fashion ETF which holds Shares in various fashion companies. The ETF holds £100 million pounds of assets at the close of trading on Friday, the total number of shares or units in the ETF numbers 12.5 million. So the Net Asset Value per Share will be £8. 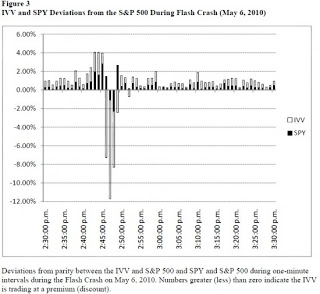 But this commonly not the case, with many ETF’s diverging significantly from the NAV per Share. This can allow traders to take advantage of such divergences by Buying or Selling the ETF when such a divergence occurs. An example commonly sighted is the 2010 flash crash when the US Dow Jones plunged a thousand points in minutes. The magnitude of the flash crash was felt to an even greater extent in some of the ETF’s that are meant to track the S&P500.; At one point during the crash IVV ETF diverged -12.00% from the S&P500.; Meaning that the the IVV was significantly undervalued and a trader who purchased the said fund at the time was likely to earn a killing.


Of course these divergences are eventually corrected but recognizing these divergence and trading at the point of significant divergence can lead to significant profits for the arbitrage trader. Though there is the potential for profit from such arbitrage activities they also inherently involve certain risks. Part of the reason fro the deviations commonly encountered in ETF prices in comparison to the underlying value of the assets, is that ETF’s commonly have a lot less liquidity making it more difficult to enter and exit positions. In fact derivatives can offer benefits for those who wish to take advantage of such ETF arbitrage opportunities as some of the liquidity issues are not pressing, though the use of leverage increases the risk as well as the potential rewards. Successful arbitrage traders can expected to make significant returns on capital.