Raghee is a self proclaimed star trader who has written a number of books on Forex and trading. The actual credentials of author are quite hard to determine, other from the fact that she is a private trader and that she has published several books on Forex trading. 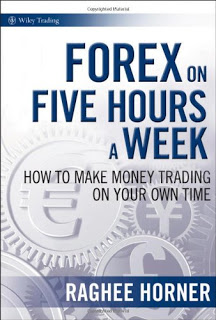 Some books are written because the author has a passion for the subject, some because there is a gap in the market and some as blatant attempt to cash in. This book would have to be placed firmly in the later category. The book has a rather cobbled together feel which is very disappointing considering the hefty price. Raghee Horner seems to be confused about the particular audience he is attempting to write for. At some points the book seems to be aimed at complete newcomers while at other points its seems is Raghee is writing for a more advanced audience introducing complex terms and concepts to the discussion without any prior explanation.
This is not to say that the book is all bad, as Raghee Horner does seem to have some good ideas about trading Forex. But unfortunately the majority of these ideas will be lost on the average reader who may well have given up on the book after a couple of chapters. It appears that much of the content has come from internet and magazine articles which have then been edited together in the form of a book. I would suggest that if you do want to read a book by this particular author that you purchase one of her other books which are somewhat better.
The claim that you can make big money from Forex in as little as five hours a week is no more than a clever marketing claim and the book doesn’t really provide an outline of what a Forex trader is supposed to do for these five hours a week, with the book functioning as introduction to Forex in general. Some of the graphs in the book are unusable due to the fact their in black and white when to be fully understandable they should be printed in full color, to be fair Raghee has included a link where you can access the said graphs in full color. But I rarely read a book while sitting with my computer open in front of me.
While not the worst book in the world, I would not recommend that anyone purchase this particular book. There are much better offerings out there available and often available for a much lower price.