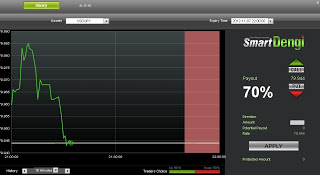 The platform will be instantly familiar to anyone who has traded binary options using a SpotOption platform before and those who haven’t will take no time to get to grips with the platform as it is extremely easy to use. The Platform offers its users a number of different views when trading Binary Options, with my preferred view being called the open view. However the platform doesn’t provided much in the way of technical tools in order to help the trader decide whether he should open up a position. All in the all the platform is pretty reasonable and I like the color scheme that has been used on the SmartDengi website. However there is nothing that sets the SmartDengi platform apart from its rivals and unfortunately it doesn’t offer provision for those who wish to trade on the go from a smartphone which is unfortunate.
Special Features
SmartDengi is practically devoid of special speakers unless your first language is Russian (Dengi stands for money in Russian so SmartDengi =SmartMoney). The site is availiable in both in English and Russian and provides assistance in Russian language for those who want it. There appears to be no special sign up or deposit deals and not much special in the way of training or new trader support. Also rather disappointingly it appears that SmartDengi doesn’t offer the option of allowing those interested in their service to open a training account allowing the customer to see if the service is right for them.
Option Contract Returns
The Option Contract returns found on SmartDengi are typical of the returns offered on the SpotOption platforms which all use the same risk management software. This leads to many of the sites to offer very similar returns depending on what action their customers have entered into. However what is interesting about SmartDengi is that I have seen a number of longer term options offered on the site with returns up to 530%, however the expiry date of these options was long way off and the chance of the Option coming good was also extremely low. But this could be off interest to those who want to a longer stance on Options than typically available.
Customer Service
The Customer service experience on SmartDengi doesn’t appear to be that great. A telephone number is offered for those who wish to speak to SmartDengi in Russian, however it appears that there is no English language telephone number for customers to contact. They instead have to contact the company using an online customer complaints form, which is far from ideal. One other thing that makes me nervy about SmartDengi is that the company has not listed its address on its website which makes me very wary about using the company. Putting up the companies address presents a commitment to transparency to me which is something important too me at least.
Regulation
It appears that SmartDengi operates unregulated at least at the time of writing. Recent regulatory changes in Cyprus will require that ChargeXP investments apply for licence if they wish to continue operating from the said jurisdiction. Generally if a site is regulated they tend to make a song and dance about the said issue. However many seem to feel the new regulations do not apply to them due to the fact that they operate essentially a white label using the SpotOption platform (SpotOption hold a CySec licence), which seems at least somewhat dubious to me. Though if operating a sole white label of SpotOption and not handling any financial transactions the need for regulation for the entity itself is less apparent. Until we see the new regulations fully come into play it will be hard to see whether SpotOption platforms do in fact need to garner there own independent regulation.
Overall, SmartDengi may not be in fact the place where the Smart money is. While it doesn’t appear to be a bad example of a platform provided SpotOption there are other sites I would prefer to use which also run using the SpotOption platform. However this being said the site might be attractive to Russian speaking customers.