Fibonacci Arcs are a technical analysis tool based on the idea of Fibonacci ratios consisting three lines drawn for the purpose of anticipating key support and resistance levels. The arcs also sometimes used to identify trading range. The first and third arc lines are based on the Fibonacci ratios .382 (38.2%) and .618 (61.8%), with these numbers often being rounded down and up to 38% and 62% respectively. With the middle arc being set at .50 or 50%. Fibonacci arcs are calculated with the use of a baseline, the arcs are draw along the baseline at the relevant points. These arcs mark potential support or reversal zones for a trader to watch,  for example after a decline the Fibonacci arcs are used to anticipate resistance or reversal zones during the counter-bounce trend. 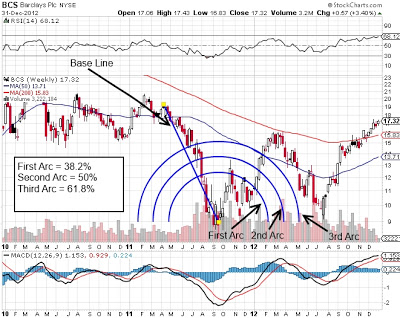 The first step is to draw a baseline from one point to another, picking either an upward or downward trend. This example shows the recent trading of Barclays Plc. With the first arc measuring 38.2% of the base line, the second arc is the middle point of the base line (50%) and the third arc measures 61.8% of the baseline. The semi-circles on the chart are the radii.
Interpretation
Fibonacci arcs at a time element to standard Fibonacci retracements. With Fibonacci arcs being based on a vertical line from trough to peak or alternatively from peak to trough. It is only concerned with the change of price over a selected time period. The slope and length of line depends on change in price and the time period selected. A big price movement over a long period of time will produce a long base line with wide arcs, with a small price movement over a short period of time producing a short base line with narrow arcs.
Support Example 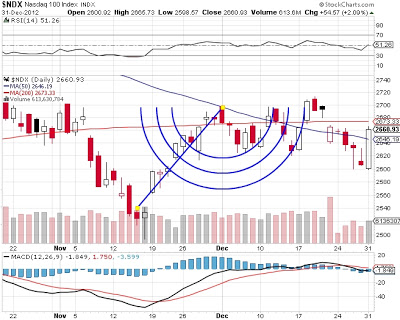 In the above example you can see several examples of the 38.2% Fibonacci arc acting as a support level with the price of the Nasdaq 100 bouncing back from around the arc several time before eventually falling below the 38.2% arc. With the 61.8% arc then acting as the next support level with the price then bouncing back to previous levels, undergoing a significant price reversal.
Resistance Example

In the above example a 18 month chart of Apple’s share price. You can see a that the Apple share price fails to break through the 38.2% arc at first before breaking through, a similar situation occurs around the 50%. The picture is rather different around the 61.8% arc with the Apple share price failing to ever breakthrough the final arc before taking another nose dive in price.
Conclusions
Fibonacci arcs can be used to identify potential support, resistance or reversal points. However in my experience Fibonacci arcs aren’t a particularly useful tool on their own. Fibonacci arcs are used to anticipate the ending points for counter-trend reversals. Just because the price is approaching a particular arc doesn’t mean the price will reverse, there are many instances of prices moving straight through arcs (some of which can be seen in the above) example. In my attempt to find an instrument which responded perfectly in line with the said arcs, I failed miserably. This is why you need to use other technical tools alongside Fibonacci arcs if you hope to be successful, their are a number of indicators which may suitable for the role.