ZuluTrade
I started by opening a ZuluTrade demo account with £5000 play money. I then proceeded to pick four different signal providers with a good track record and limited Draw Down, in the hopes of minimizing risk. After having made my various picks I waited and let the signal providers make there moves. Apart from this I used the default settings suggested by the providers and ZuluTrade.

According to ZuluTrade if I had followed the signal providers I had chosen from 2010 until now my £5000 play account would have grown have doubled in size and been worth over $10,000 now. It wasn’t until the next day did any of my signal providers open any positions, however things got off to a good start with the said signal provider opening three positions all of them being reasonably profitable.

After this I simply left the four signal providers I had chosen to do their work and trade the Forex markets. After 14 days about half way through the month the traders I had followed had made me £250 from my initial £5000 deposit. From the below graph it appears that my account hasn’t had a negative day, which is really quite impressive. In half a month I had made a 5% return which is very impressive over such a short period of time. 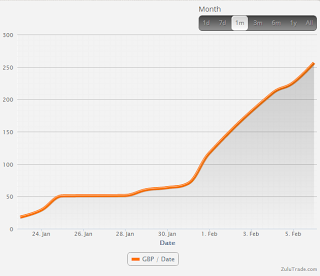 After 21 days, my demo account was up by £458 a return on investment of 9% with still another 7 days to go, it seems possible to get a return on investment of over 10% a month by copying some of the best traders on ZuluTrade. It seems that if you pick your signal providers wisely you can make some serious profits with ZuluTrade without having to micro manage your account to much.
I therefore recommend that people at least try out the 30 day demo account and decide whether ZuluTrade is suitable for them. I would personally contend that ZuluTrade is the best social trading platform currently available and seems superior to eToro and Tradeo’s offerings. Obviously there are still considerable risks involved with trading at ZuluTrade, however for some I am sure that using ZuluTrade would be a great option.