Largely confined to America a pump and dump scheme is a form of market manipulation undertaken by a rogue company, group of individuals or person. Since the arrival of the internet in 1996, Pump and Dump schemes have been harder to detect as the perpetrator’s have been able to hide online behind internet anonymity. Making it harder for authorities hard to tract down the individuals behind such schemes. 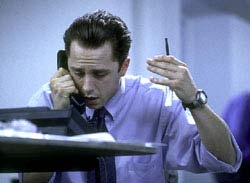 What is a Pump and Dump Scheme?
Normally the individuals behind such a scheme target microcap companies typically traded on Over the counter markets. Before these individuals start approaching potential investors they take up a large position in the company at a low a price, by buying shares up gradually over an extended period of time.

Having taken a large position in a particular microcap company the individuals will often tout the company as being a hot stock or they will claim to have some inside information about a new development which will lead the price to skyrocket. In the early 90’s before the rise of the Internet many boiler room brokerages would target people through tele-marking calls, as famously depicted in the 2000 film Boiler Room. However it is more common to be contacted in the form of an email or for the individuals behind the scheme to post on message boards or forums. It is reported that up to 15% of all US e-mail spam is sent by those behind pump and dump scheme’s. I have received a number of email’s from pump and dump schemes promoting various US micro cap companies, I monitored the stocks and indeed their were large changes in the volume of trading in that particular stock.

This increased interest in a small capital stock can often lead to the stock price increasing by a huge amount. As this happens the individuals behind the pump and dump scheme start selling off their shares while continuing to hype up the company through the means of tele-marketing and spam emails further increasing demand for the stock to rise even higher. By the time the stock finally crashes those behind the pump and dump scheme will have aimed to have sold off all of their holdings in that particular company and made huge profit from the scheme.

How can you tell when your being targeted?
If you receive any email telling you that someone has inside information about a particular stock ;you should instantly recognize this as attempt to lure you into getting involved in a pump and dump scheme. Divulging inside information about a company is not only ill-moral but also highy illegal. Be very careful about what you read on the internet. If someone on a message board is touting a company on a internet message or forum do not get sucked into investing without undertaking your own very thorough investigation of the company and it’s prospects. Unsolicited phone calls from individuals and companies you do not have a connection with, should also seriously raise alarm bells.