Binary Options have been available over-the-counter (sold directly to the buyer) for a number of years now. However these were general seen as an exotic instrument due to the fact there was no market for trading these over the counter options, between the dates they were issued and expired. These Binary Options were generally embedded in more complicated option contracts and were normally only purchased by extremely sophisticated buyers. An interesting development began in mid 2008 with a number of companies beginning to offer Binary Options online to prospective clients. The binary options offered by these companies were essentially a dumbed down version of exchange traded binary options. By January 2012 it was estimated that 90 of these platforms existed including white label platforms. The proliferation of these sites is unsurprising due to the fact the odds are stacked significantly in the houses favor. The instrument also differs from other financial derivatives (such as CFD’s) in the fact that a binary options provider cannot profit unless his customers on the whole make a loss. 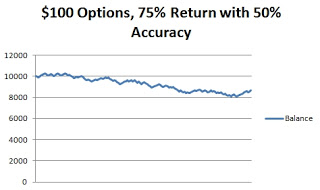 These kinds of options have rightly been criticized by many including Gordon Pape who wrote a very damming article in Forbes magazine. I myself have personally criticized Binary Options a number of times aiming to show that Binary Options offer a raw deal to those who trade them. In one of my investigations into Binary options using Monte Carlo simulations I showed that in order to be profitable at trading Options which offered a 70% rate of return you would have to predict an instruments movement correctly over 60% of the time. While I’m sure there are a few unique and talented individuals who could do predict the movement of financial instruments with such accuracy, they would still be better off trading other financial derivatives such as Financial Spread bets or Contracts for difference.

Another problem with these dumbed down options is that for much of their existence they have been completely unregulated. Initially a number of financial regulators including Cysec of Cyprus came out to say that Binary Options were not covered under their remit due to the fact that they were not properly financial instruments. It was widely thought that Binary Options as offered by these providers would become regulated as a form of gambling, in fact a number of providers most notably OneTwoTrade went down the route of becoming regulated by gambling authority. However, in 2012 Cysec made the decision to regulate Binary Options as financial instruments becoming the first MiFID regulatory authority to do so. However, I believe that they will later rue this decision, as it will weaken their reputation as prudent financial regulator. I’m not against Binary Options but what I do resent is them being represented as a financial product when they are really a form of fixed odds betting. Though I would go on to say that if you want to make bets on financials their are better alternatives including a number of bookmakers and if you reside in the UK in the form financial spread bets.

Real money can be made from Binary Options, not the dumbed down pseudo Binary Options offered on these platforms but in real exchange traded Binary Options where there are significant arbitrage opportunities to be had due to Options miss pricing. I suggest that those who are interested in trading the financial markets look into other instruments including Contracts for Difference, Margin Trading and if your jurisdiction allows it financial spread betting.