Barclays Margin FX provides two platforms to those wishing to trade Foreign Exchange with them. The first is a WebTrading program that I had a play around with. To be honest I wasn’t particularly impressed with the program. While it was perfectly functional and allows for traders to open and close positions. It was then I noticed that the Barclays platform was powered by FXCM. Apparently back in October 2012, Barclays chose FXCM as their technology provider. This essentially means those who trade with Barclays Margin FX are using FXCM’s price feed and platform with Barclays operating as its own liquidity provider. While this doesn’t present any real problems it does mean you stuck with using a relatively weak web or download platform. For instance there is no option to use the ever popular MetaTrader platform when trading with Barclays Margin FX. This is a bit annoying and significantly limits the kind of trading activity you can engage in. There is also no support for Mobile Trading something which is becoming increasingly popular.

Special Features
There is nothing particularly Special about the Barclays Margin FX offering. Your essentially just trading with the FXCM Web and Download platforms with Barclays acting as the counter party. Barclays Margin FX operates with the Market Model brokerage model so it is unable to offer the incredibly tight spreads you would expect from such a major a banking institution. The main attraction for potential customers is the possibility of trading Forex with a well known and well regarded international bank, with Barclays having a very strong reputation when it comes to brokerage services. 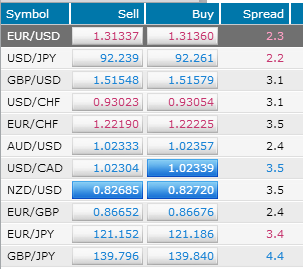 The Spreads at Barclays Margin FX aren’t bad and are among the better Spreads to be offered by brokerages operating using a Market Maker Model. For instance, the target Spread on the EUR/USD is 2.1 Pips which while not mind blowing isn’t bad either. However Spreads are often significantly wider than the quoted target spreads featured on the Barclays Margin FX Website. As there are a number of other brokerages who offer similar if not tighter spreads it makes me question why individuals would choose to deposit cash at Barclays, considering the lack of a sophisticated trading platform and the limited leverage offered by the service. I can think of a number of MiFID regulated brokerages who offer equally as tight spreads, while also offering their customers significantly more leverage.

Customer Service
This has to be one of the bigger selling points of the Barclays Margin FX service. Barclays Margin FX is operated by Barclays Brokerage arm, in general Barclays has built a good reputation as a financial broker offering a variety of financial instruments including Stocks, CFD’s, ETF’s and Financial Spread bets. I know a number of people who use Barclays Brokerage services and all of them have been happy with the level of service they have provided. I would suspect that this high standard of service is extended to those using it’s Margin FX platform.

Regulation
As already mentioned Barclays Margin FX is a trading name of Barclays Stockbrokers Ltd. who are based in the UK and regulated by the FSA. While the main arm of Barclays has got itself into a number of regulatory scrapes recently Barclays Margin FX has a totally clean regulatory record with no disciplinary action having ever been taken against them. A clean regulatory record in a country with a strong reputation for financial regulation should be enough to alleviate the concerns of many potential customers.

Overall, Barclays Margin FX offer a high level of service, however the platform is let down by its weak user interface.